To overcome millennia of gynocentric oppression, solidarity among men is essential. When a person is killed, few even notice that he’s a man. Large anti-men bias in criminal justice generates little public concern. Holding behind bars in jails and prisons about fifteen times as many men as women matters less to elites than the gender distribution of winners of the Booker Prize. Men must strongly and loyally support each other in order to promote gender equality and social justice. 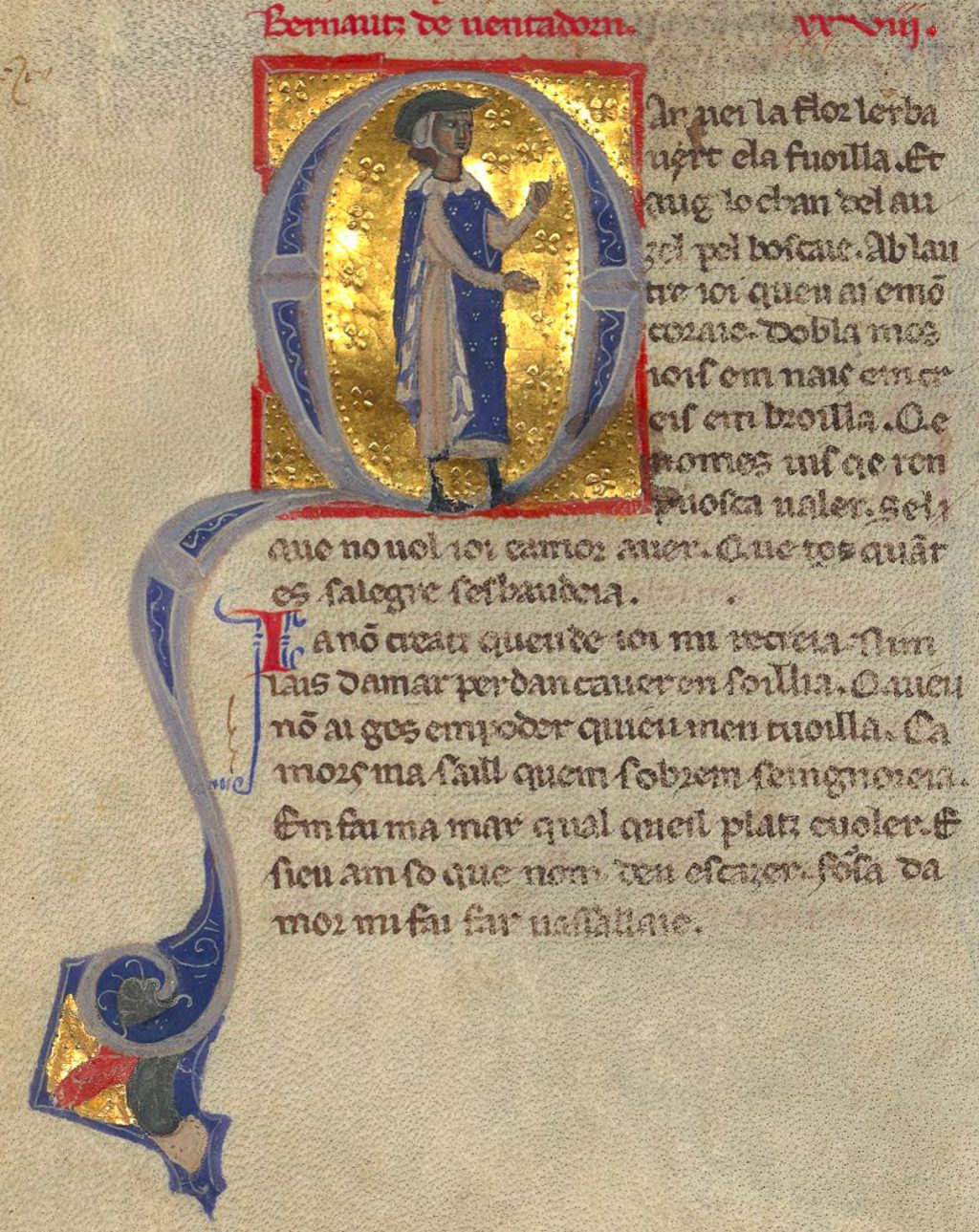 Men relating to women easily slide into grotesque self-abasement. Consider the pathetic case of the twelfth-century man trobairitz Bernart de Ventadorn. He suffered from acute one-itis and gyno-idolatry for a beautiful woman lacking compassion for him. Bernart lamented:

She’s mastered cheating, trickery,
so that always I think she loves me.
Ah, sweetly she deceives me,
as her pretty face confounds me!
Lady, you’re gaining absolutely nothing:
in fact, I’m sure it’s toward your loss
that you treat your man so badly.

God, who nurtures all the world,
give her a heart to receive me,
for I don’t want to eat any food
and of nothing good I have plenty.
Toward the beautiful one, I’m humble,
and I render her rightful homage:
if she pleases, she can keep me or sell me.

Evil she is if she doesn’t call me
to come where she undresses alone
so that I can wait at her bidding
beside the bed, along the edge,
where I can pull off her close-fitting shoes
down on my knees, my head bent down:
if only she’ll offer me her foot.

Writing in the first century BGC, Parthenius of Nicaea recorded a marvelous story of solidarity among men. In 277 BGC, Gauls from present-day southern France raided the ancient Greek city of Miletus, which is in the middle of the Aegean coast of present-day Turkey.[2] The raid occurred during the gynocentric, gender-exclusive women’s festival Thesmophoria. In the ancient world, when an enemy sacked a city, all the city’s men usually were killed. The Gauls’ raid on the gender-exclusive festival produced one happy outcome: no men were killed.[3] Because women are regarded under gynocentrism as having higher social value than men, the Gauls didn’t kill the women, but took them as captives.

Being a captive woman was much better than being a dead man. The Milesians paid the Gaulic raiders large ransoms of gold and silver to get back some of the Milesian women. As for the other Milesian women, some probably had dominated, abused, and tormented their husbands, who thus were pleased to be freed from them. Those women became instead the wives of Gaulic men. Those Gaulic men endured a Pyrrhic victory. As has commonly been the case, women suffered less than men did.

The Milesian woman Herippe disappeared before her husband Xanthus, a highly respected and well-born citizen of Miletus, was able to ransom her. Xanthus and Herippe together had a two-year-old child. Xanthus retained custody of their child. At the same time, Xanthus missed Herippe greatly. Converting just part of his possessions into the enormous sum of two thousand gold coins, he traveled all the way to southern France to ransom from the Gauls his beloved wife Herippe.

In the land of the Gauls, Xanthus found that Herippe had become the wife of one of the Gauls’ most distinguished leaders. Showing a generous heart, this Gaul received Xanthus readily and hospitably:

when Xanthus went in, he saw his wife, who threw her arms around him and drew him toward her with great affection.

The Gaul put on a banquet for Xanthus and seated Herippe next to Xanthus. As drinks were being circulated, the Gaul asked Xanthus how much money he had for Herippe’s ransom. Xanthus said that he had a thousand gold coins. The Gaul declared that Xanthus should keep three parts for himself, his wife, and his child, and give the fourth part as ransom.

Late that night, after the others had gone to bed, Herippe sharply criticized Xanthus for being willing to pay such a large ransom. Husbands must be able to endure their wives’ sharp criticism. In this case, Xanthus explained that he had another thousand gold coins hidden in the soles of his servant’s boots. Xanthus explained that he had been willing to pay a much larger ransom. In short, Xanthus made clear to Herippe how much he valued having her as his wife.

Herippe didn’t reciprocate her husband’s great love for her. Even worse, she viciously betrayed him:

The following day the woman told the Celtic how much gold her husband had. She tried to persuade the Gaul to kill Xanthus. She much preferred him, she said, to her native country and her child. As for Xanthus, she utterly detested him.

Xanthus had no idea that his wife despised him. If he had even imagined that she as a captive of the Gauls would come to prefer her Gaulish husband to him, Xanthus would never had made the long journey with a huge amount of money to attempt to ransom her.

Herippe’s disloyalty to her native country, her contempt for her former husband, and her disregard for their young child didn’t please the Gaul. What Xanthus failed to perceive, the Gaul understood: Herippe was a wicked woman. In the ancient world, being a wicked woman wasn’t regarded as a praiseworthy display of strength and independence.

The Gaul decided to spring a surprise punishment on Herippe. He escorted Herippe and Xanthus to the border of Celtic country. Then he announced that he wanted to sacrifice an animal to the gods:

The sacrificial animal brought in, the Gaul bade Herippe take hold of it. She did, as she had often done in the past. Then, stretching up his sword, he brought it down and beheaded her. He tried to persuade Xanthus not to take it badly. He told him about her plot and permitted him to take all the gold back with him.

Today, the Gaul’s punishment of Herippe might seem barbaric. The Gaul might rightly regard today’s acute anti-men bias in punishment, as well as mass imprisonment of men, to be a travesty of justice.

Traditional folk justice is “tit for tat,” or “what goes around, comes around.” Early in the thirteenth century, a didactic poet recorded in German:

When a man gives malicious advice to another,
it is only right that he receive the same treatment.

The Gaul interpreted a similar ethos to apply equally to men and women. When his wife advised him to kill her former husband, he killed her after she became his former wife. The Gaul deserves credit for acting decisively in support of gender equality and solidarity among men, irrespective of race, Gaul or Greek. Upholding solidarity among men and promoting gender equality should progress to more humane practices. Yet some morally sanctioned action toward worthy ideals is better than no action at all.

The well-born ancient urban Greek and the sophisticated troubadour love poet are cultural heroes of gynocentric society. Too many men today are as obtuse as Xanthus was in relation to his wife. Too many men today seek to be feet-kissing servants to women like Benart de Ventadorn was. We all can learn from the ancient barbarian Gaul.

For all the songs of Bernart, with English translations, Nichols (1962). For some analysis of his style, Clifford (1976).

[2] Lightfoot (1999) p. 413. The Gauls established a permanent settlement in the region of Asia Minor that came to be known as Galatia. Greeks colonized Miletus about three thousand years ago. By the sixth-century BGC, Miletus was one of the wealthiest Greek cities.

Parthenius’s manchette for this story states:

The story is told by Aristodemus of Nysa in the first book of his Histories, except that he changes the names and calls the woman Euthymia instead of Herippe, and the barbarian Cauaras.

Lightfoot (2009). Lightfoot notes that the Gaul’s name Cauaras suggest a connection to the area around Marseilles in southern France.

Lightfoot observed, “The thrust of this unusual story is to demonstrate male solidarity….” Lightfoot (1999) p. 413. Authorities acting under gynocentrism are interested in suppressing stories of solidarity among men. Lightfoot herself declared, “the theme {of the Herippe story} is misogynistic.” Id. p. 414. Under gynocentrism, labeling works “misogynistic” is a powerful tool of censorship and suppression.

Person today don’t protest because men are betrayed and unjustly killed. The Gaul took decisive action in solidarity with his fellow man.

[image] Illuminated initial depicting Bernart de Ventadorn. On folio 15v of the Chansonnier provençal (Chansonnier K). Made in the second half of the thirteenth century. Preserved as MS. BnF Français 12473, via Gallica.