I remember a night that I passed, given wine,
Whose intensity drove away care,
By a beautiful girl in traditional blouse
Who has tresses of long, flowing hair.

She would wiggle her bottom to give me a thrill,
(Quite voluptuous, covered in lace);
Every part of her body had power to seduce
And beauty stood still on her face.

As she served me a red that I reckoned was pressed
On her cheeks, as it was so refined,
She would whore with her eyes, make me sick with desire
For her eyes were by magic designed.

Now, a toast to those days which have long passed away;
I can no more enjoy the sweet fare
Of that bold, country lass with the well-rounded ass
But the memory soothes my despair. [1]

Abu Nuwas (Abū Nuwās al-Ḥasan ibn Hānī al-Ḥakamī) is commonly regarded as a great, and by some the greatest, classical Arabic poet. Living in Baghdad late in the eighth century, Abu Nuwas relished wine and carnal relations, both of which he closely associated in his poetry.

For carnal relations, Abu Nuwas considered the merits of women relative to “beardless youth.” In a poem that appears under the heading “Of the libertine / dissolute poem {majūn} of Abu Nuwas in praise of women, and the ugliness of beardless boys,” Abu Nuwas wrote:

Many a poet does not awaken from the glow of his idle talk; by his ignorance he is led astray.
In his poems he gives precedence to beardless youths; I am astounded by his poetry and by anyone like him.
He asserts that any young man is filled to the brim with coquettishness, but safeguarded from menstruation and pregnancy.
Hey you; you abandon beautiful women and find satisfaction in a beardless youth who looks like someone else as he gets going. [2]

In comments on another poem, Abu Nuwas quoted Abū l-ʻAnbas on the advantages of young men relative to women as sexual partners:

The youth is easier to sustain and of more assistance to you, while you are safeguarded from his uncleanness and from his pregnancy, and you need not fear any punishment by cutting and stoning if you are arrested when you are with him. When you feel isolated he is family; and when you are with drinkers he is a fellow drinker; and on the road he is a companion. [3]

Relative to men in the medieval Islamic world, men in western countries today face greater risks of punishment not just for having sex with women, but also for interacting with women in way that could be interpreted as involving unwelcomed sexual interest. Punishment for adultery has always been biased toward punishing men. Punishment of men for pregnancy that results in a child has increased greatly as a result of state-mandated sex payments (“child support”) enforced with incarceration for non-payment. Apart from felony criminal punishment for pederasty, men today have greater incentives to pursue relationships with beardless youths rather than with women.

Judging by his poetry, Abu Nuwas strongly preferred having sex with men, particularly beardless youth. In one poem, Abu Nuwas again referred to the problem of pregnancy:

How often has a brother come to me most generously
and yet avoided pregnancy or giving birth! [4]

In another poem, Abu Nuwas proclaimed:

My wish, my demand and my pursuit is only a lad
A ripe woman was longing for me, but many a hoping person is frustrated!
I said when I saw her: “Go away sister, and depart.
Find me a servant and go away, make yourself a prostitute.”
As long as I live I will not put my finger in the hole of a scorpion. [5]

Abu Nuwas recognized women’s beauty. Yet he also seems to have feared a woman becoming pregnant, as commonly happens through uncontracepted sex of reproductive type. Abu Nuwas described in poems his outrageous and brutal sexual desire.[6] His apparent fear of pregnancy, in contrast, is a reasonable facet of his sexual desire. 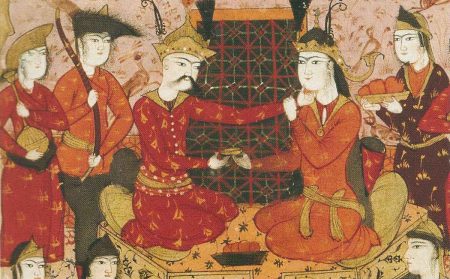 Men’s sexual desire is malleable to some extent. If having sex with women becomes more costly, dangerous, or unsatisfying for men, more men will turn to other sexual outlets.[7]

[5] Abu Nuwas, Dīwān 5.8, trans. Schippers (2014) p. 86. Sexual allure gave women high status and social power. Abu Nuwas satirized women’s high sexual value in a poem in which four female prostitutes each sang the praises of her vagina. For example, one sang, “My vagina is like a split pomegranate and smells of ground amber. How lucky the one who gets me when I’ve shaved!” Trans. Kennedy (2005) p. 37.

Arabic men poets were concerned about gender equality in sexuality. Al-Aʻsā imagined a woman’s sexual initiative and her sexual effort on behalf of the poet:

When we met at her door and
she beckoned to me to join her
I expressed what I felt for her and she responded kindly
so as to indulge me,
Sometimes she was as bedding for me and other times I was
the same for her, with her on top.

[6] Abu Nuwas wrote a poem in which he raped a group of young men:

I served them without respite wine mixed with water
— It was as warming and bright as kindled fire —
Until I noticed their heads incline,
Bent and crooked with drunkenness
And their tongues tied and heavy,
They now either slept or reclined;
I got up trembling to have sex with them
(All those who creep stealthily tremble at the thought!);
Their trouser-bands stymied my pleasure at first
But then, with subtle art, I untied them
To reveal each man’s quivering backside
Oscillating supply like a green bough.
O for this night which I spent enraptured
In continual enjoyment and excess,
Making from this to that man,
Screwing whomever I could find in the house
Until the first one awoke and got up
Feeling bruised at the thighs;
Then I rose with fear to wake up the others,
Saying: “Do you feel the same thing as me?
Is this sweat we’ve all been stained with?”
They said: “It looks more like butter.”
And when I saw them now alert
I went off to relieve myself

Trans. Kennedy (2005) pp. 41-2. In another poem, Abu Nuwas told that he raped a young adolescent male with whom he got drunk:

And he left, dragging his delightful robes which
I had touched with my iniquitous behavior,
Saying, “O woe!” as tears overcame him, “You have torn away
from me the dignity I had preserved.”
I replied, “A lion saw a gazelle and lunged at it; such is the variety
of Fate’s vicissitudes!”

I am struggling against my eyes,
my heart and my penis;
Would that for these eyes I had others
and another heart in place of my own,
and instead of my penis that of an old man
who can remember the days of ʻAd.

I saw once a sheikh from among the monks who was alone without a companion and it was necessary for him to pierce a melon and to cause his penis to penetrate into the hole. He raised his voice and cried: “I’ll screw and screw; until I ejaculate in this melon!”

[image] Persian miniature from the seventeenth century. The image is available on the web, but not well-sourced. If you have a precise source, please say so in the comments.