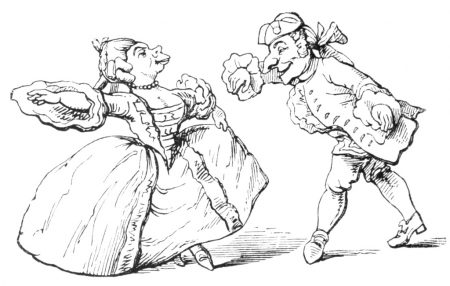 Drawing upon a highly respected epic of the ancient Roman poet-scholar Lucretius, Jonathan Swift early in the eighteenth century continued the long literary effort to enlighten men. Swift wrote poems about Cassinus and Peter, and Strephon and Chloe. Though brilliant, they were social failures.

Cassinus and Peter were sophomores at the University of Cambridge. Witty young men steeped in classical learning, they enjoyed idle friendship, playing flutes and smoking pipes with each other in their rooms and discussing beloved women. One day Peter found Cassinus disheveled and distraught. With deep concern, Peter sympathetically inquired about Cassinus’s troubles. Cassinus explained that his beloved Caelia had betrayed him:

Oh Peter! Beauty’s but a Varnish,
Which Time and Accidents will tarnish:
But, Caelia has contriv’d to blast
Those Beauties that might ever last.
Nor can Imagination guess,
Nor Eloquence Divine express,
How that ungrateful charming Maid,
My purest Passion has betray’d.
Conceive the most invenom’d Dart,
To pierce an injur’d Lover’s Heart. [1]

Yet, kind Arcadians, on my Urn
These Elegies and Sonnets burn,
And on the Marble grave these Rhimes,
A Monument to after-Times:
“Here Cassy lies, by Caelia slain,
And dying, never told his Pain.”

Before telling of his pain, Cassinus adjured Peter to the most solemn confidence:

The Secret thou shalt ne’er impart;
Not to the Nymph that keeps thy Heart;
(How would her Virgin Soul bemoan
A Crime to all her Sex unknown!)
Nor whisper to the tattling Reeds,
The blackest of all Female Deeds.
Nor blab it on the lonely Rocks,
Where Echo sits, and list’ning mocks.
Nor let the Zephyr’s treach’rous Gale
Through Cambridge waft the direful Tale.
Nor to the chatt’ring feather’d Race,
Discover Caelia’s foul Disgrace.
But, if you fail, my Spectre dread
Attending nightly round your Bed

Then Cassinus boldly revealed the secret that made him mortally deranged:

And yet, I dare confide in you;
So, take my Secret, and adieu.

In other words, Caelia was a human being who performed the same bodily function that men and other animals do. She was not actually a goddess. For ignorant and benighted men and women, the revelation that women are not better than men shakes them to the core of their understanding.

Misunderstanding the nature of women and men destroys marriages. Consider the marriage of Strephon and Chloe. Chloe was widely regarded as a woman-goddess:

Of Chloe all the town has rung,
By ev’ry size of poets sung:
So beautiful a nymph appears
But once in twenty thousand years;
By Nature form’d with nicest care,
And faultless to a single hair.
Her graceful mien, her shape, and face,
Confess’d her of no mortal race [3]

As men historically have been compelled to do, Strephon won Chloe’s hand with the promise of providing material resources to her:

He blew a Settlement along:
And, bravely drove his Rivals down
With Coach and Six, and House in Town. [4]

That’s all that was known about Strephon before he married Chloe. Chloe, in contrast, attracted public attention even with intimate details of her life. That’s how gynocentrism functions.

Strephon was anxious about his performance on their wedding night. They had arranged for Chloe a lavish, expensive wedding fit for a goddess. Could he subsequently fulfill her?

Strephon had long perplex’d his Brains,
How with so high a Nymph he might
Demean himself the Wedding-Night:
For, as he view’d his Person round,
Meer mortal Flesh was all he found:
His Hand, his Neck, his Mouth, and Feet
Were duly washt to keep ’em sweet;
(With other Parts that shall be nameless,
The Ladies else might think me shameless.)

Like many men, Strephon under-valued his penis. He imagined that his body was impure and detestable relative to his wife’s body:

Can such a Deity endure
A mortal human Touch impure?
How did the humbled Swain detest
His prickled Beard, and hairy Breast!

A woman isn’t a deity. Masculinity isn’t toxic. Men are wonderful. That includes men with beards and men with hair on their chests. Yet men struggle with men’s sexual obligations combined with criminalization of men’s sexuality and pervasive misandry:

Strephon, who had been often told,
That Fortune still assists the bold,
Resolv’d to make his first Attack:
But, Chloe drove him fiercely back.
How could a Nymph so chaste as Chloe,
With Constitution cold and snowy,
Permit a brutish Man to touch her?
Ev’n Lambs by Instinct fly the Butcher. [5]

Chloe, a woman strong and independent enough to say no to her fiancé, had good reason for declining to have sex. She had drunk twelve cups of tea shortly before retiring to their wedding bed:

Twelve Cups of Tea, (with Grief I speak)
Had now constrain’d the Nymph to leak.
This Point must needs be settled first;
The Bride must either void or burst.

She reached out and brought a piss-pot into their bed. Then she used it as it’s meant to be used:

Strephon who heard the fuming Rill
As from a mossy Cliff distill;
Cry’d out, ye Gods, what Sound is this?
Can Chloe, heav’nly Chloe ——?
But, when he smelt a noysom Steam
Which oft attends that luke-warm Stream;
(Salerno both together joins
As sov’reign Med’cines for the Loins)
And, though contriv’d, we may suppose
To slip his Ears, yet struck his Nose:
He found her, while the Scent increas’d,
As mortal as himself at least. [6]

Women piss and fart just like men do, except for a slightly less convenient and less vulnerable apparatus for the former. Men should be taught these facts of life from an early age. Kept in ignorance under the veil of gynocentrism, Strephon learned true facts of gender equality only in his marriage bed:

But, soon with like Occasions prest,
He boldly sent his Hand in quest,
(Inspir’d with Courage from his Bride,)
To reach the Pot on t’other Side.
And as he fill’d the reeking Vase,
Let fly a Rouzer in her Face. [7]

Men who finally learn the truth about women will fart in the face of gynocentrism.

The lesson for Strephon and for all is fundamentally gender equality. Woman and men must have a shared view of a shared privy:

O Strephon, e’er that fatal Day
When Chloe stole your Heart away,
Had you but through a Cranny spy’d
On House of Ease your future Bride,
In all the Postures of her Face,
Which Nature gives in such a Case;
Distortions, Groanings, Strainings, Heavings;
‘Twere better you had lickt her Leavings,
Than from Experience find too late
Your Goddess grown a filthy Mate.
Your Fancy then had always dwelt
On what you saw, and what you smelt;
Would still the same Ideas give ye,
As when you spy’d her on the Privy. [8]

As a high-school student working a summer job at IBM, I remember being awe-struck by the protruding feminine beauties of a young, revealingly dressed secretary. An old hand in the department, noticing that I was being sexually harassed, said to me, “I bet she doesn’t look so hot bent over taking a shit!” Only much later in life did I realize what a learned man he was.

But now, by Friendship’s sacred Laws,
I here conjure thee, tell the Cause;
And Caelia’s horrid Fact relate;
Thy Friend would gladly share thy Fate. [9]

In the story of Strephon and Chloe, Jonathan Swift in his authorial voice offered much better advice:

On Sense and Wit your Passion found,
By Decency cemented round;
Let Prudence with Good Nature strive,
To keep Esteem and Love alive.
Then come old Age whene’er it will,
Your Friendship shall continue still:
And thus a mutual gentle Fire,
Shall never but with Life expire.

Men should study and learn Jonathan Swift’s Epicurean wisdom. Most men haven’t done so. That reflects the success of gynocentrism and the social failure of men’s literature.

Men on bended knees asking women to marry them, men opening doors for women, men last into life-boats, to say nothing of men’s enormous gender protrusion in violent death and incarceration, and keeping silent about men totally lacking reproductive rights — the present testifies to the social failure of men’s literature. More than two millennia ago, the learned poet-scholar Lucretius satirized love-besotted men ignorantly abasing themselves to their beloved human goddesses. Despite much additional, brilliant literature of men’s sexed protest since Lucretius’s time, men continue to be subservient to women. The past was female. The present is female. Female supremacists prominently proclaim that the future is female. If nothing changes, they will be right. That would continue a colossal failure of enlightenment.

[2] For those unable to complete the rhyme, the final word in the above quote is “shits”. Gilmore rightly recognized:

Cassy is a comic gem, flawless in fecklessness, “confirm’d,” like Dryden’s Shadwell, “in full stupidity.”

[3] Jonathan Swift, Strephon and Chloe ll. 1-8, from Jack Lynch’s online edition. Subsequent quotes from Strephon and Chloe are from that edition. A quarto pamphlet that Roberts published in London in 1734 was titled, A Beautiful Young Nymph Going to Bed. Written for the Honour of the Fair Sex. To which are added, Strephon and Chloe. And Cassinus and Peter. Schakel (1978) p. 137. That’s the first known publication of all three poems. The description “Written for the Honour of the Fair Sex” may allude to Lady Mary Wortley Montagu vicious attack on Swift in her poem, The Reasons that Induced Dr. S. to Write a Poem Call’d the Lady’s Dressing Room. Montagu’s poem follows the conventional anti-meninist line of attempting to silence men through ad hominem accusations of sexual desperation, sexual impotence, and sexual frustration.

[4] Lynch notes, “Coach and Six, a coach drawn by six horses, used only by the very rich; House in Town, a London house, again available only to the rich.”

[8] In Jonathan Swift’s poem, A Panegyrick on the D–n, in the Person of a Lady in the North, a lady praises Swift (Dean of St. Patrick’s Church in Dublin) for building privies. The criminalization of men’s gaze is an obstacle to following Swift’s privy wisdom for loving. The Lady’s Dressing Room ll. 119-20 declared:

Strephon in this poem was peeping into the stinking mess of a lady’s dressing room. The first published version of this poem (1732) included the line, “Oh! Celia, Celia, Celia shits!” Swift’s A Beautiful Young Nymph Going to Bed (1734) is similar in theme to The Lady’s Dressing Room, but the former is completely gynocentric.

[9] Swift was familiar with Epicurius and Lucretius. Swift’s A Panegyrick on the D–n, in the Person of a Lady in the North declares:

Good lord! what can my lady mean,
Conversing with that rusty Dean!
She’s grown so nice, and so penurious,
With Socrates and Epicurius!