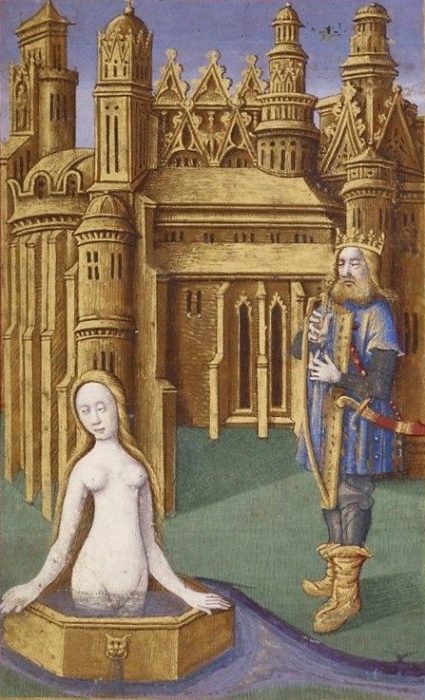 I have already said, Pious and Holy One, that I am thankful to you for your gifts. I thank you, first and foremost, for having given me a mother who is beautiful yet chaste and modest and exceedingly God-fearing. Mentioning her beauty alone would be profane and foolish if I didn’t add (to show the vanity of the word “beauty”) that the severity of her appearance was sure proof of her chastity.

Guibert’s mother is beautiful {pulcher}, yet she has a severe appearance. So does she look like Saint Pelagia, or like a viciously anti-meninist woman? Guibert immediately explained:

Fasting for the poor, who have no choice for when food is available, is really a form of torture and is therefore less praiseworthy. In the same way, if rich people abstain from food, their merit is derived from abundance. So it is with beauty, which is all the more praiseworthy if it resists flattery while knowing itself to be desirable.

Guibert’s mother evidently is a woman that men desire, like men do Saint Pelagia. His mother’s severity isn’t repellent bitterness and hostility toward men. Her severity is merely her reason and judgment strong enough to resist the servile flattery of weak, self-abasing men.

Guibert went on to consider a classical understanding of beauty. He stated:

Sallust was able to consider beauty praiseworthy independent of moral considerations. Otherwise he never would have said about Aurelia Orestilla, “Good men never praised anything in her except her beauty.” Sallust seems to have meant that Aurelia’s beauty, considered in isolation, could still be praised by good people, while admitting how corrupt she was in everything else.

Aurelia Orestilla came from a leading political family in the Roman Republic of the early first century BGC. She was the wife of the eminent Roman commander Catiline when he engaged in a conspiracy to burn Rome and overthrow the Republican government. Cicero associated Aurelia Orestilla with obscenity.[4] She was probably similar to her contemporary Sempronia, a type of woman profusely celebrated in mass media today:

Sempronia was a woman who had often committed many crimes of masculine daring. In family heritage and beauty, and in her husband and her children, she was abundantly favored by fortune. She was well-read in the literature of Greece and Rome, and able to play the lyre and to dance more skillfully than an honest woman would find necessary. She had many other accomplishments that aid voluptuousness. Nothing she valued so little as modesty and chastity. You could not easily say whether she was less sparing of her money or her honor. Her sexual desires were so ardent that she sought men more often than they sought her. Even before the time of the conspiracy she had often broken her word, repudiated her debts, and been privy to murder. Experiences of poverty and extravagance had combined to drive her forward. Nevertheless, she was a woman of no paltry endowments. She could write verses, bandy jests, and use language modest, tender, or wanton. In short, she possessed a high degree of wit and charm.

Like Bishop Nonnus with respect to Pelagia, Guibert had a realistic understanding of womanly beauty. Writing in a more liberal and less doctrinaire age than ours, Guibert frankly explained:

Speaking for Sallust, I think he might just as well have said that Aurelia deserved to be praised for a natural, God-given gift, impaired though she was by all the other impurities that made up her being. Likewise a statue can be praised for the harmony of its parts, no matter what material composes it. It may be regarded as an idol by the Apostle Paul from the viewpoint of faith, and indeed nothing may be called or is more impious, but one can still admire the harmony of its limbs.

The classical understanding of beauty closely linked beauty with desire, but commonly trivialized men’s work of desire. Consider, for example, the classical poet Eumolpus. One day while bathing in a Roman bathhouse with other naked men, he attempted to recite learned poetry. His fellow bathers ridiculed him, attacked him, and drove him out of the bath. Outside, a huge crowd surrounded another naked man. Eumolpus sarcastically reported:

In contrast to their treatment of me, a huge crowd surrounded that other man’s groin and clapped their hands in humblest admiration. He had genitals that hung down with such weight that you would have thought that the man himself was a mere appendage to his penis. What a hard-working young man he must be! I suspect that he has to begin today to finish tomorrow. So it wasn’t long before he got himself an assistant — some Roman noble or other, with a dubious reputation, they say — who gave his clothes to cover him up and brought him home with him, I believe, to enjoy his good fortune in private. … It just shows that it’s more profitable to work your genitals than your brains.

Eumolpus thus trivialized the erection labor of even a man with very heavy equipment.[8] More generally, in the defective classical understanding of beauty, men’s desire requires of men negligible labor.

Another man was from a noble Beauvaisien family with rich estates in Noyon. He was elderly, and his body had been worn out long ago. Yet he had a wife vigorous in the business of the marriage bed. That’s greatly pernicious. So, deserting married life and the world, he professed vows as a monk.

With great love for women, men engage in tiring work in bed. Other medieval literature similarly tells of men exhausted by their erection labor. Desire requires strength-sapping labor from men.

[2] Guibert of Nogent, Monodiae {Songs of Self} 1.2, Latin text from Bourgin (1907), English trans. from Archambault (1996) (adapted). All subsequent quotes from Guibert, unless otherwise noted, are similarly sourced from Monodiae 1.2.

Guibert ended his discussion of his mother’s beauty in a way that underscores the close relationship between beauty and desire:

Thank you, God, for instilling virtue into my mother’s beauty. The seriousness of her whole bearing was enough to show her contempt for all vanity. Her lowered eyes, paucity of speech, and unexcitable facial expression by no means indicated acquiescence to flirtatious looks.

Id. Guibert here shifts to referring to his mother’s beauty with the Latin word decor. That word most commonly represents physical beauty. Konstan (2015) p. 142. Guibert’s mother is physically beautiful, but she in other ways distances herself from sexual desire.

As many mothers throughout history have with respect to their sons, Guibert’s mother dominated him. He regarded her as almost God-like and was greatly concerning to follow her instructions. She regarded Guibert’s sexual desire as dangerous to him. That’s certainly true for men under gynocentrism today.

“Whenever you were caught in adultery, whenever you caught adulterers yourself, when arising from the same act of gross indecency you found yourself a woman to be both wife and daughter.” It is said that Catilina committed adultery with the woman who was later his mother-in-law, and took to wife the female offspring of that fornication, although she was his daughter. This charge Lucceius also levels against Catilina in the orations which he wrote attacking him. I have not yet discovered the names of these women.

Cicero’s speech In his white gown {In toga candida}, according to the commentary of Asconius 91C. Latin text and English translation from Lewis (2006) pp. 183-4. A correction written in Poggio’s manuscript of Asconius added, “the name of his wife was Aurelia Orestilla, of his mother-in-law, I don’t know {nomen uxori fuit Aurelia Orestilla, de socru ignoro}.” Id. (in editor’s note).

Cicero, in his Letters to Friends {Epistulae ad Familiares} 9.15 associated Aurelia and Lollia with obscenity. Cicero stated, “if we use the word Aurelia or Lollia we must prefix an apology {sin de Aurelia aliquid aut Lollia, honos praefandus est}.” Latin text and English translation from Loeb edition of William Glyn (1927).

[5] Sallust, The War With Catiline {Bellum Catilinae} 25, Latin text and English translation (adapted) from the Loeb edition of Rolfe (1921/1931). This Sempronia was the wife of Decimus Junius Brutus. On her involvement in the conspiracy, Bellum Catilinae 40.5. For a modern apology for the perhaps adulterous Sempronia, wife of Scipio Aemilianus, Beness & Hillard (2016). Here’s some analysis of modern reporting of men being cuckolded.

Despite Aurelia Orestilla almost surely being deeply involved in what has been called the Catiline conspiracy, she apparently suffered relatively little from that failed uprising. Catiline in 62 BGC was killed fighting for the conspiracy attempt. But in 50 BGC Aurelia Orestilla was making an elite marriage for her daughter. Cicero, Epistulae ad Familiares 8.7.7, discussed in Evans (1986) p. 70.

After their respective meetings, both men and women conspirators convene in the early hours of the morning to take their leave and make a final statement of confidence. Eventually, when the conspirators are sentenced to death, it is understood that the women, including Aurelia, are not punished.

See Aurelia in Corrigan’s character list. A gender protrusion in men’s mortality and sex discrimination in punishment are common aspects of gynocentrism.

[6] The word forma most specifically refers to physical shape or figure, but it can take on the meaning “beauty” in context. The Latin words for beauty formosus and formositas, which are derived from forma, highlight that physical meaning of beauty. Konstan (2015) pp. 144, 148.

[8] Despite Eumolpus’s disdain’s for Ascyltus’s erection labor, Eumolpus himself experienced sexual exhaustion in his relationship with the Pergamene youth. Eumolpus threatened to alert the father of the Pargamene youth if that youth didn’t stop pressing him for more sex. Satyricon 82-7. On the literary context of this story, Harrison (1998). The gender-political implications of the story have been regrettably overlooked.

[image] Bathsheba sexually harassing David. As a result of that sexual harassment, one man suffered a reproductive injury and a man and a boy were killed. Specifically, Bathsheba’s husband Uriah was cuckolded and killed, and Bathsheba and David’s newly born son died. 2 Samuel 11-12. In recent decades scholars have tended to blame the victim and condemn men in such situations for “the male gaze.” That reflects the growing influence of carceral anti-meninism. Illumination on f. 71 of French Book of Hours, made c. 1485. Preserved as British Library MS Harley 2863.