According to Chaucer’s medieval Miller’s Tale, the wild, young, and beautiful Alisoun was cuckolding her husband, a hard-working carpenter named John. Her lover was their boarder, the cleric Nicholas. Yet another, the culturally learned parish cleric Absolon, was madly in love with Alisoun. He also sought to have sex with her. 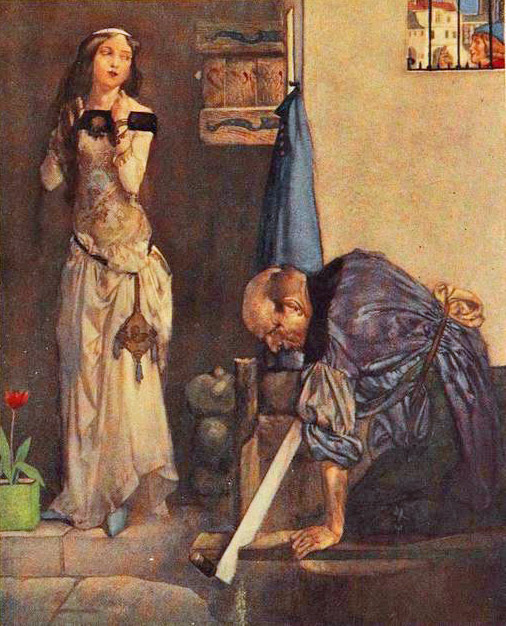 The cleric Nicholas devised a shrewd plan to enjoy a night with Alisoun. He told her husband John that another great flood was forthcoming the following Monday. The whole world would then be washed away. While merely an unlearned carpenter, the Christian John knew the biblical story of the righteous Noah saving his family from the flood. Nicholas proposed that John tie to the roof of the house three tubs in which they could float out the flood, scheduled to last only a night. John procured three tubs, lashed them to the roof with ropes, and built a ladder for accessing them. On the fateful evening Alisoun, John, and Nicholas climbed up into the tubs. When John fell asleep, Alisoun and Nicholas climbed down for the delight of sex in the marital bed.

The cleric Absolon, educated in foolish practices of courtly love, was at Alisoun’s window late that evening, praising her sweetness and bemoaning his love sickness. No snowflake melting in fear of a man’s yearning gaze, Alisoun firmly and directly told Absolon to leave:

“Go from the window, you idiot,” she said.
“So help me God, it will not be ‘come kiss me’.
I love another — and else I were to blame —
well better than you, by Jesus, Absolon.
Go forth your way, or I will cast a stone,
and let me sleep, in the name of twenty devils!”

Absolon begged for a kiss for the love of Jesus. Alisoun secured Absolon’s promise to leave if he had a kiss. She then called him forth to the window. In the darkness of night, Alisoun’s white flesh shone like a moon at the window. Absolon moved in to kiss what he though was her mouth. Kissing her, he felt the hair of a beard beneath her orifice. He had kissed the bottom of her ass![2] With a laugh she pulled back and slammed the window shut.

Thoroughly humiliated, the courtly lover Absolon resolved on revenge. He borrowed from a smith a hot plow blade. Then he went back to Alisoun’s window and said that he would give a gold ring for another kiss. Nicholas was then taking a piss:

And he opened up the window hastily,
and he put out his ass stealthily
over the buttocks, to the thighs.
And then spoke this clerk, this Absolon,
“Speak, sweet bird, I know not where you are.”
This Nicholas then let fly a fart
as great as if it were a thunderbolt,
and with that stroke Absolon was almost blinded.
But he was ready with his hot iron,
and he stabbed Nicholas in the middle of the ass.

{ And up the wyndowe dide he hastily,
And out his ers he putteth pryvely
Over the buttok, to the haunche-bon;
And therwith spak this clerk, this Absolon,
“Spek, sweete bryd, I noot nat where thou art.”
This Nicholas anon leet fle a fart
As greet as it had been a thonder-dent,
That with the strook he was almoost yblent;
And he was redy with his iren hoot,
And Nicholas amydde the ers he smoot. }[3]

A gas attack violates international conventions on war. Sexual violence against men is far too prevalent.[4] Penetrated with the hot plow blade, Nicholas was egregiously wounded:

Off goes the skin a hand’s breadth about.
The hot plow blade so burned his rump
and for the pain he thought he would die.
As if he were crazy, for woe he began to cry,
“Help! Water! Water! Help, for God’s heart!”

{ Of gooth the skyn an hande-brede aboute,
The hoote kultour brende so his toute,
And for the smert he wende for to dye.
As he were wood, for wo he gan to crye,
“Help! Water! Water! Help, for Goddes herte!” }

John was asleep in a tub tied to the roof. Nicholas’s cries for water jolted John awake. John in the darkness thought that the flood had come. He quickly sliced the ropes holding the tubs to the roof. His tub then crashed hard on the floor far below. The cuckolded husband sprawled on the ground in a daze with a broken arm.[5] Students, write this down: the theme of Chaucer’s Miller’s Tale is man’s inhumanity to man! 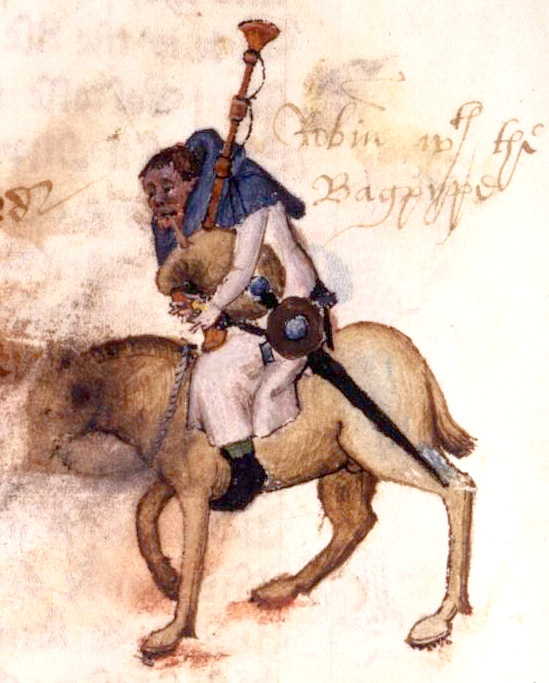 Cuckolding injures men: it threatens men’s legitimate reproductive interest in knowing their biological children. Women know for certain who their biological children are. Without modern DNA testing, men don’t know. This inequality in parental knowledge is a fundamental gender inequality. Gynocentric society attempts to shame and coerce men into silently and compliantly accepting this fundamental gender inequality. In the Miller’s Tale, the drunk Miller explicit revealed the ideological imperative:

A husband shall not be inquisitive
of God’s secrets, nor of his wife’s.
So long as he may find God’s plenty there,
of the rest he need not inquire.

This ideological imperative associates the wife with God.[6] It demands that the husband be grateful for his wife having sex with him. He should not inquire whether his wife is also having sex with other men. He should accept being cuckolded and not knowing whether children of the marriage are his biological children. Like the drunk Miller of the Miller’s Tale, men are complicit in allowing this ideological regime of cuckolding to continue.[7] The theme of Chaucer’s Miller’s Tale is man’s inhumanity to man!

[1] Geoffrey Chaucer, Canterbury Tales, Miller’s Tale, vv. 3708-13, Middle English text from the Harvard Chaucer Website, my modernized English, benefiting from that of id., and the glossed texts by the University of Glasgow’s STELLA, and Jack Lynch. This tale is told by Robin the Miller in response to the knight’s tale.

On the reception of the Miller’s Tale to the present, Beidler (2015). The Harvard Chaucer Website calls this tale “the best of all the fabliaux in English or French,” declares that it has “a plot of breath-taking perfection,” and cites the critic Henry Seidel Canby claiming that when Nicholas is crying in pain after he received an ass-reaming, “it seems ‘as if the heavens opened, and the gods looked down and smiled.’”

[2] Academic scholars of Chaucer have associated Nicholas kissing Alisoun’s ass with patriarchal oppression. As always, it’s an issue of holes:

Which hole? Alison’s sense of balance would have to be rather remarkable were she to hang only her anus, and not her vagina, out the shot window. But, since Absolon gets a mouthful of hair, he apparently didn’t kiss her backside and miss her vagina, as the Miller has with his singular noun. (See v. 3732: “And at the window she put out her hole {And at the window out she put her hol}).” While Nicholas is obsessed with Alison’s private parts, and the Miller, in telling his tale, shifts continually between holes and “pryvetee,” the Miller himself reveals his confusion about, and maybe even his ignorance of, female anatomy. … Elaine Hansen and E. Jane Burns generalize the Miller’s confusion into that of patriarchy, and lament another patriarchal appropriation of women’s bodies.

[3] Absolon had good reason to fear for his safety when Nicholas farted. Absolon felt threatened by farting:

In all the town there was no brew house or tavern
that he did not visit to provide pleasure —
any where a merry barmaid was.
But truth to say, he was somewhat squeamish
about farting, and fussy about speech.

{ In al the toun nas brewhous ne taverne
That he ne visited with his solas,
Ther any gaylard tappestere was.
But sooth to seyn, he was somdeel squaymous
Of fartyng, and of speche daungerous. }

the fact remains that branding someone with a red hot piece of iron is a violent and hateful act. Certainly “unBoethian,” and in the case of a man attacking a woman, even darker than that.

[5] The Miller’s Tale specifies that Alisoun was eighteen years old (v. 3223) and her husband John was “old” (v. 3225). Such an age difference tends to prompt ageism and blaming the cuckolding victim:

John the Carpenter was asking for trouble by taking a wife too young for him; he becomes thus the victim of his own gullibility and the agent of his own social humiliation.

Despite the hostile pressures of ageism, age-diverse marriages have been successful. Medieval literature explicitly recognized the possibility of joy and contentment in age-diverse marriages. That’s not just an aspect of the relatively liberal and tolerant medieval period. In 1943, Oona O’Neill, age 18, married Charlie Chaplin, age 54. Oona and Charlie had a happy, 34-year-long marriage that produced eight children and lasted to the day of Charlie Chaplin’s death in 1977.

The Miller’s Tale thus blasphemously — and deliciously — elevates Alison’s private parts and their unknowability to the level of God’s.

Western culture has surrounded the penis with fearsome sanctity for centuries.

Id. p. 241. To the contrary, penises historically have been disparaged, ridiculed, and brutalized to a much greater extent than vaginas have been. Castration is deeply entrenched in Western culture.

[7] In Boccaccio’s Decameron, Madonna Filippa cuckolded her husband Rinaldo. On trial for adultery, she argued against wasting what remained of her sexual desire after she had fully satisfied her husband. Madonna Filippa’s argument won widespread public acclaim. She prevailed against being charged with adultery. Chaucer picked up the key argument of Boccaccio’s story and embedded it in a more general statement of gynocentric ideology.

Academics have uncritically celebrated the gynocentric bias of the Miller’s Tale:

In the end Alisoun, like love, remains free and we surmise in control of herself — and the situation.

Tripp (1986) p. 211. Men deserve as much control of themselves and their situations as Alisoun has. Relatively to women, men disproportionately pay for sex, men lack control over biological parenthood, and men are subject to forced financial fatherhood. Gynocentrism isn’t merely a modern phenomenon:

The independence and freedom allotted woman here hints at a certain preference for that gender, which seems to receive further support in the treatment of Alisoun. A striking example of Alisoun’s favoring by the Miller is the fact that, by the end of the tale, she is the only figure who avoids some sort of punishment.

Lavezzo (2017). The penal bias of punishment in the Miller’s Tale is consistent with the highly gender-disproportionate incarceration of men today. Women’s privileged status shows no fragility in the Miller’s Tale, or in scholars’ criticism of it. Cf. Friedman (2019).

[images] (1) This illustration (color enhanced) for Chaucer’s Miller’s Tale depicts Alisoun and her husband John, who labored as a carpenter, as well as the young cleric suitor Absolon at the window. By W. Russell Flint from Farjeon (1930). Version from 1913 publication. (2) Robin the Miller plays the bagpipes. Illumination on folio 34v of the early fifteenth-century Ellesmere Manuscript of the Canterbury Tales. Preserved as MS. EL 26 C 9 in Huntington Library (San Marino, California). Source image via Wikimedia Commons.

Lavezzo, Kathy. 2017. “The Miller’s Tale: Protest, Complaint, and Uprising in the Miller’s Tale.” Essay Chapter in The Open Access Companion to the Canterbury Tales. Online.