In 2009, Harvard University Press published a edited collection of scholarly papers entitled Sexual Coercion in Primates and Humans. That title is inapt. Primates include humans. Book-marketing interests probably drove adding “and humans” to primates in the title.[1] The book’s subtitle, An Evolutionary Perspective on Male Aggression against Females, displays more publicly significant interests.  Among humans, about equal numbers of men and women report suffering sexual coercion. Aggression isn’t equivalent to sexual coercion. Men are much more likely than women to be subject to serious physical aggression. The book’s conceptual confusions and anti-men biases underscore primate gynocentrism. Primatology in this book unintentionally helps to explain highly disproportionate criminalization of men through sex-biased social concern. 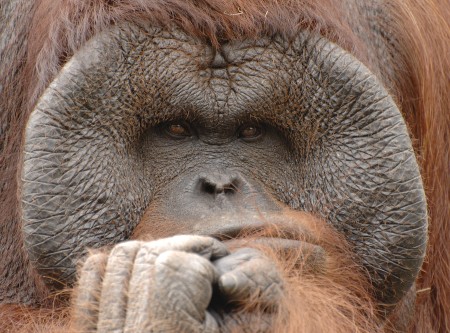 In recent decades, primatology has recognized that male and female sexual interests differ. Sex differences are real. Female primates typically have greater direct parental investment than do male primates. Male primates typically are more eager to have sex. Female primates live longer, are less likely to be killed, and are more socially valued. These facts are reasonably associated in an evolutionary perspective. They imply conflict between females and males within the fundamental, universal evolutionary interest in reproduction.

In addition to supporting social injustice, misandristic misrepresentations of men’s interests foster fundamental evolutionary misunderstandings. Influential contributors to Sexual Coercion in Primates and Humans declared in their contribution, “human male fitness is and always has been limited primarily by access to the reproductive efforts of fertile women.”[5] In addition to being conceptually silly, that’s quantitatively wrong by roughly a factor of twelve over the past millennium. From about 2000 years ago to 1000 years ago, world human population was about 250 million persons. World population is now about 6 billion persons.[6] What changed in the last millennium wasn’t that women decided to increase their reproductive efforts. Inventions that almost exclusively men made allowed massive human population growth to occur.

With its gynocentric conceptual framework, Sexual Coercion in Primates and Humans fails to provide insight into fundamental issues. Most sexual activity in non-human primates doesn’t involve males physically forcing females to have sex.[7] That reality suggests that non-human primates have evolved means to limit physical confrontations over sexual activity. Plausible mechanisms are stress, pleasure, and trust. Physical confrontations create stress and physical risks, including to the prevailing animal. From an evolutionary perspective, physical confrontations hurting the fitness of one’s sexual partner is disadvantageous. Animals, including humans, have biological mechanisms that associate sex with pleasure. Those mechanisms are less operative in hostile sexual encounters. Hostile sexual encounters are also likely to undermine trust between animals. Reducing trust limits opportunities for further interaction and lessens stability of the larger social group. Biological mechanisms common across primates probably reduce hostile sexual encounters and encourage mutually desired ones much more than do human practices of demonizing, criminalizing, and incarcerating men.

Primatology can provide a valuable critical perspective on human behavior. Humans show relatively little concern about violence against men.[8] Humans are highly reluctant to acknowledge that roughly equal numbers of men and women are victims of sexual coercion.[9] Hugely disparate imprisonment of men generates little social concern even in societies where gender equality is a major concern in public discussion. These fundamental, troubling facts should be recognized in intellectually serious, ethically engaged primatology that serves to make human societies more humane.

[1] The editors obviously knew that primates include humans. They specifically displayed that elementary knowledge in the last words of the introductory chapter: “in both humans and nonhuman primates.” Muller, Kahlenberg & Wrangham (2009) p. 18. The editors also displayed that elementary knowledge in the title of their concluding chapter, in the first paragraph of that chapter, and in the last sentence of that chapter. Wrangham & Muller (2009) pp. 451, 466.

[2] The explanation isn’t just devaluation of men’s lives projected onto other animals. Hunters in part prefer to kill male animals because male animals tend to be larger and to have distinctive ornaments.

In an oft-repeated phrase, Strauss (1980) maintained that “a marriage license is a hitting license.”

Wilson & Daly (2009) p. 275. Cf. Wilson & Daly (1992) p. 289. Beyond its misandristic rhetoric, this claim means not much more than that men, like other organisms, have an interest in reproducing biologically.  One could with equal reason declare:

[7] Across primates, males physically forcing females to have sex seems to be most common among orangutans. The share of forced copulations varies widely by local population and male type (flanged vs. unflanged). A rough median figure is 50%. Knott (2009) p.86, Fig. 4.2. Although copulations are physically forced, “the degree of physical wounding is extremely low”; “severe wounding of females has never been reported.” Id. p. 82. Forced copulations are a very small share of total copulations for other primates, including humans.

[8] Relatively little concern about violence against men has a chimpanzee parallel in Muller, Kahlengerg & Wrangham’s chapter, entitled “Male Aggression against Females and Sexual Coercion in Chimpanzees” (Ch. 8). It declares:

There are few published data on the rates of intersexual aggression in chimpanzees, but in our own site of Kanyawara, in Uganda’s Kibale National Park, females are as likely as males to be victims of male aggression.

Id. p. 184. The prevalence of false claims about domestic violence against women shows that manipulating data on aggression against females is relative easy. Manipulating data on deaths is more difficult. Among chimpanzees, four times as many males die from aggression as do females. Muller, Kahlengerg & Wrangham’s chapter obscures that large sex disparity in chimpanzee victimization from lethal aggression.

[9] Like much scholarship, Muller & Wrangham (2009) shows no concern for sexual coercion of males. In Ch. 14, p. 355, Melissa Emery Thompson defines rape to exclude men being raped. In Ch. 16, Tommaso Paoli described a survey he administered about bonobos. The survey asked only about male bonobos coercing females to have sex. No such cases were reported. Several respondents on their own initiative reported cases of females sexually coercing males. Reporting on the bonobo colony at Columbus Zoo, Monique Fortunato stated:

I have seen some ‘sexual coercion’ by females to males — not in the strictest sense, in which there are beatings and/or forced copulation, but there is one female in particular that makes very strong advances to males for oral or manual stimulation.

Amy Pollick reported many cases of female sexual coercion of a male bonobo:

I saw plenty of sexual coercion in the San Diego Zoo bonobos — mostly just one female (Lolita) towards one male (Junior). Lolita (second-ranking female) must have done it 40 times in 114 hours of observation, wheras the third-ranking female just 3 times.

[image] Male breeding orangutan. Thanks to TheBusyBrain and flickr.

Maddison, Angus. 2001. The world economy: a millennial perspective. Paris, France: Development Centre of the Organisation for Economic Co-operation and Development.