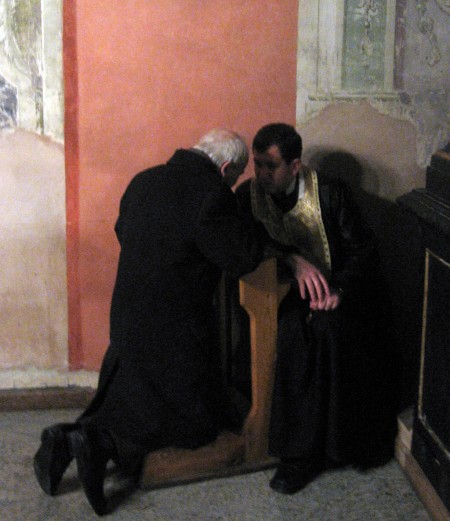 De minimis non curat lex. Res ipsa loquitur. De lege ferenda. A teacher’s most fundamental task is to attract the attention of students. Without students, there is no teaching business. Without students’ attention, they learn nothing. Burchard of Worms, a well-educated, eleventh-century bishop, surely knew these truths.[1] In building up a cathedral school at Worms, he sought to attract and train priests to serve the people of his diocese. He thus presented penitential canons in the time-tested classical Latin style of Seneca’s Controversiae.

Burchard of Worms wrote a law book, his Decretum, explicitly for school teaching. He dedicated his book to Provost Brunicho of Worms. Brunicho may well have been the chief operational officer of the cathedral school at Worms. Burchard stated in his dedication to Brunicho:

you, beloved, requested that I deliver this little book, now at last concisely assembled, to young boys for study, so that what our coworkers, today in their maturity, had neglected due to the ineptitude of their predecessors, is handed over to those now of tender age and to others willing to learn. Indeed let them first be made apt students, and afterward both teachers and leaders of the people, and let them learn in schools what some day they ought to say to those committed to themselves. [2]

Many men are reluctant and fearful of speaking about the sins of women. That’s readily understandable. But young men tend to be interested in the sins of women, particularly sexual sins. To serve the needs of his schools, Burchard wrote sensational descriptions of women’s sins.

Burchard’s most sensational descriptions of women’s sins occur in the section of the Decretum most relevant to actual priestly work among the people. Hearing confessions and forgiving persons for their sins has been at least since the sixth century a major, day-to-day responsibility of working priests. Burchard included in his Decretum an explicit list of questions and responses for the use of priests in conducting confessions and administering penance.[3] Aspiring priests could thus easily understand how their studies related to their future job responsibilities.

Burchard’s Decretum engaged students creatively. For priests, just as for other bureaucrats, uninspired workers tend to view their jobs as routine and tedious. Burchard inspired imagination in student-priests studying the work of hearing confessions:

“Perhaps, most beloved,” the priest should tell the penitent, “you are unable to remember everything you have done. Therefore, I will interrogate you. Be careful not to hide anything by diabolical deception.” [4]

Many of Burchard’s interrogations are sensational:

Have you tasted your husband’s semen in order to make his love for you burn greater through your diabolical deeds? If you have, you should do seven years of penance on the appointed fast days.

Have you done what some women are accustomed to doing? They take their menstrual blood, mix it into food or drink, and give it to their men to eat or drink to love them more. If you have done this, you should do five years of penance on the appointed fast days.

Have you done what some women are accustomed to doing? They take a live fish and put it in their vagina, keeping it there for a while until it is dead. Then they cook or roast it and give it to their husbands to eat, doing this in order to make the men be more ardent in their love for them. If you have, you should do two years of penance on the appointed fast days.

Have you done what some women are accustomed to doing? They lie face down on the ground, uncover their buttocks, and tell someone to make bread on their naked buttocks. When they have cooked it, they give it to their husbands to eat. They do this to make them more ardent in their love for them. If you have, you should do two years of penance on the appointed fast days. [5]

These interrogations have literary sophistication scarcely imaginable in respected discourse today. Burchard sensationally figured oral sex as tasting your husband’s semen. While baking bread was a well-recognized medieval figure for having sex, Burchard sensationally dilated that figure and connected it explicitly to eating. Within the work of priests, eating bread evokes the holy sacrifice of the Mass. Within cultural circumstances disparaging and criminalizing men’s sexuality, Burchard affirmed wives’ gratitude and giving of thanks for their husbands’ sexual effort.[6]

Despite the burden of husbands’ work for their wives and families, some wives throughout history have lacked appreciation for their husbands. Juvenal, along with other classic Latin authors, recognized the problem of women killing their husbands with poison and other means. To the serious problem of domestic violence against men, Burchard brought great imagination:

Have you done what some women are accustomed to doing? They take off their clothes and smear honey all over their naked body. With the honey on their body they roll themselves back and forth over wheat on a sheet spread on the ground. They carefully collect all the grains of wheat sticking to their moist body, put them in a mill, turn the mill in the opposite direction of the sun, grind the wheat into flour, and bake bread from it. They then serve it to their husbands to eat, who then grow weak and die. If you have, you should do penance for forty days on bread and water. [7]

The woman’s naked body smeared with honey alludes to the bodily allure of women. But this interrogation reverses the figure of the woman’s eagerness and gratitude for the man’s service. Turning against the sexual-Eucharistic figure of making and eating bread, the mill turns backwards, and the husband dies. The penance of forty days on bread and water, associated with Christ’s purification in the desert, points forward to redemption and life-embracing relationships between women and men.[8]

[1] A canon of Worms wrote an admiring life of Burchard of Worms, apparently soon after Burchard’s death. According to that life, Burchard was born of a high-status family and studied in various places.

Burchard’s education was probably quite similar to that described by his contemporary Walter, bishop of Speyer, who worked on the Decretum with him. In his Libellus de studio poetae qui et scolasticus, the first book in his Vita of St. Christopher, Walter described reading various Latin writers from antiquity and late antiquity, including Boethius, Horace, Persius, Juvenal, Terence, and Vergil.

[2] Burchard of Worms, Preface to the Decretum, from Latin trans. Somerville & Clark (1998) p. 100. Schmitz (1898), available online, provides an early critical edition of the Latin text. An earlier Latin edition is in Patrologia Latina 140, cc. 949-76. Burchard’s preface emphasizes the usefulness of his work and the importance of training and teaching priests.

[3] The priestly job responsibility of hearing private confessions seems to have been first formalized in Ireland in the sixth century. For overviews of medieval literature and practice of penance, Frantzen (1983) and Meens (2014).

Most of Burchard’s Decretum describes sins and associated penances. Bk. 19, Ch. 5, however, is entitled Corrector sive Medicus (“Edifier or Physician“). It provides prefatory instructions (ordo) to priests on confessions. It then includes questions and prescribed penances for affirmative answers.

Whoever releases seed into the mouth is to fast seven years.

Whichever freeman has intercourse with his wife during the menstrual period is to fast forty days. And whoever drinks a man’s blood or his seed is to fast for five years.

If she mixes a fish that dies in childbirth with menstrual blood, makes it into bread, and gives it to her husband to eat and drink, she should do five years of severe penance.

[6] Medieval penitentials don’t include canons about men administering aphrodisiacs to their wives. Payer (1980) p. 351. Medieval wives apparently provided men with all the sexual love that they needed. Medieval men’s relatively difficult, exhausting lives may have contributed to making them tired in bed. Medieval canon law supported men’s limited energy reserves by establishing sex canons such that marital sex was licit less than 44 days a year after accounting for holy days and restrictions related to a woman’s menstrual cycle. Hamilton (2001) p. 197. On the other hand, one of Burchard’s canons penalized men having sex with their wives from behind, like a dog (“retro, canino more”). Schmitz (1898) p. 421 (canon 52). Some men may on occasion have preferred that position. The truly chivalrous medieval man was always ready to perform his duty even despite his own personal preference.

[8] Frantzen, a leading scholar of Anglo-Saxon literature, pointed the field toward literary study of early medieval penitentials in Frantzen (1983) Ch. 7, and Frantzen (1991). But the field of Anglo-Saxon studies hasn’t been welcoming to Frantzen’s challenging, non-conformist viewpoints.

While the literariness of Burchard’s penitential seems obvious, scholars have failed to recognize and understand it. Payer took too narrow a view of “functional utility”:

They {penitentials} were practical handbooks which would have had no conceivable raison d’etre aside from their functional utility in the administration of private penance. … There is no indication that the penitentials were conceived to have any other independent literary value such as a treatise of Augustine or a Biblical commentary of Jerome might have.

Payer (1984) p. 119. Austin declares, “we ought to look beneath the surface and not take his collection {Burchard’s penitential} at face value.” Austin (2004) p. 957. But she emphasized its theoretical-jurisprudential sophistication along with its use in straightforward pastoral care. Körntgen focused on just teaching, but took too narrow of a view of teaching:

it is hardly conceivable that a priest would have read the complete catalogue {in Burchard’s Bk. 19, Ch. 5} to the penitent believer. Should we therefore assume that Burchard’s penitential is a literary fiction, which was never intended to be used in the practice of penance? The practical significance of the work might be found in a different context. Burchard stresses in his preface that at least one of his aims for the whole collection was to educate the young clerics connected to the cathedral school in Worms. For such educational purposes the consequent amplification of the questionnaire would have provided the perfect assistance. Pupils in Worms and elsewhere could learn which kind of crimes they could encounter in the process of hearing confession and the kind of penances they should dispense for these. The question format, moreover, together with the fact that it was embedded in the ordo, provided a direct connection to the process of hearing confession. Pupils in this way not only learnt about the material side of penance, that is the possible kinds of sin and appropriate forms of penance; but also its ritual side, that is the liturgy of penance and the specific order in which confession should be heard and a penance determined.

Körntgen (2006) p. 114. The literary fictions included in Burchard’s penitentials, like the literary fictions in Seneca’s Controversiae, have practical teaching value in attracting attention. Scholars who question that claim could verify it by presenting Burchard’s sensational penitentials within the classroom. However, under some current totalitarian university administrations, such thought and expression probably would be inadvisable.

[9] Current laws regulating sexual behavior, paternity, and child custody are effectively more punitive, oppressive, and absurd than anything found in medieval canon laws. Men in the U.S. today have forced financial fatherhood legally imposed on them despite fraud and an explicit, written contract to the contrary. Many paternity judgments that impose crushing financial obligations on men are legally established through undue influence, mis-representation, and mis-service. Abortion laws effectively provide free choice to neither women nor men. The Crabtree case provides a fitting exemplar of the bigotry and irrationality of today’s family law.

[image] Penitent in confession with priest in Lviv, Ukraine. Thanks to Vodnik and Wikimedia Commons.

Payer, Pierre J. 1984. Sex and the penitentials: the development of a sexual code, 550-1150. Toronto: University of Toronto Press.