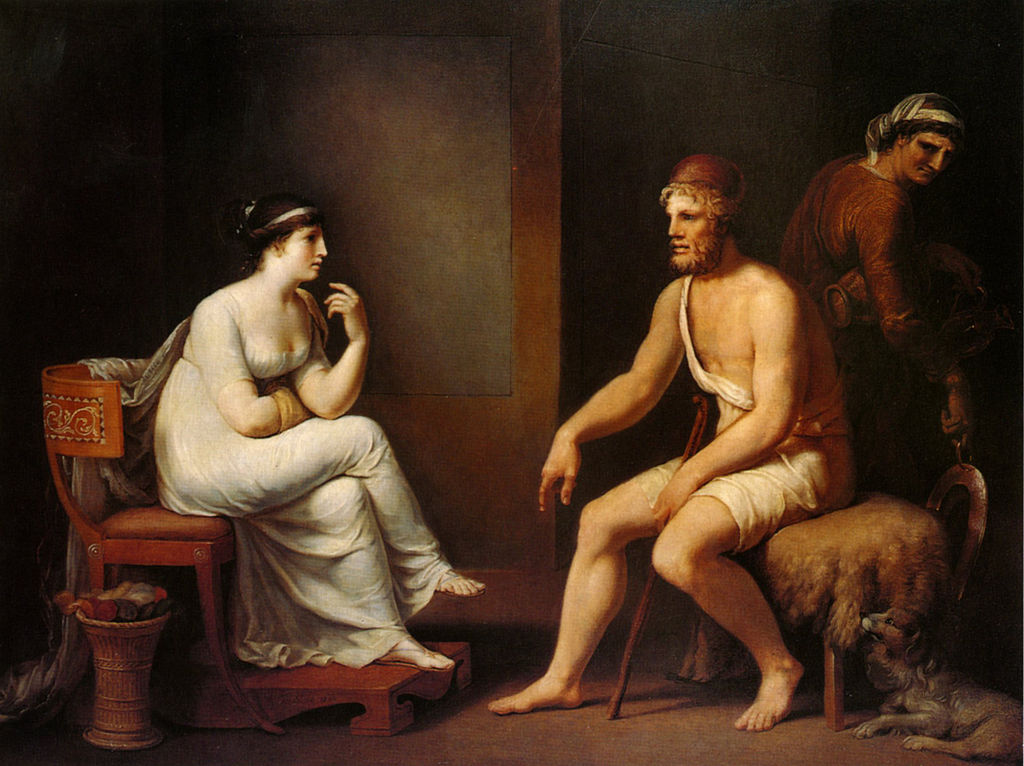 Husbands commonly credit all their success to their wives and engage in small and large acts of yes-dearism. Doing otherwise is scarcely permitted within today’s social construction of gender equality. Ancient and medieval literature, however, described husbands resisting subordination to their wives and depicted tragic consequences of husbands’ uxorious weakness.

While women’s power has commonly been misrepresented to serve gynocentric interests, in reality husbands are barely able to resist subordination to their wives. About the year 799 in Charlemagne’s court, a learned poet warned husbands:

Be concerned about your own marriage partner.
Don’t let her mar your mind with enticing.
Sweet kisses to your knees, hands, neck, and cheeks
she’ll give, mingling them with soft words.
She’s accustomed to arm her own prayers with a potion
as great as the bow-carrying Cupid arms his energetic darts.

Husbands today are more likely to face their wives attacking them with bitchiness rather than blandishments. But the underlying, operative principle is the same: husbands will do anything to enjoy their wives’ love. Strong, independent husbands, or merely prudent ones, prepare to defend themselves against their wives’ attacks:

If you are secured with the metal helmet of a strong mind,
so that she would see her darts rebound,
then groaning she’ll retreat, giving feigned sighs,
grieving that her prayers have no weight.

Resisting his wife’s attack isn’t sufficient for a husband to resist successfully being subordinate to his wife. If a direct attack fails, wives will seek to subordinate their husbands with a social offensive:

Soon a boy, or a nurse, or maybe her lying little maid
will say, “Why do you despise my lady’s requests?”
With her face downcast, she will offer a quieted sigh,
“He whom I presently see is always honored by me.
Whatever other wives request, they get, to do good or harm,
but I proceed to control over nothing promised.”
She should at last ask, they would say and run to kiss her,
and to you, “Why do you suffer to be irksome to her?”
But may your mind fight, as it would oppose a returning enemy.
Take care that recurring battles do not defeat you!

Men lack sufficient education in fighting with words. Most husbands are eventually defeated. They are thus compelled to endure marital life subordinate to their wives.

Husbands’ uxoriousness is well-attested in literature across the ages. Written about 2700 years ago, the Book of Isaiah describes women of Jerusalem having expensive jewelry and luxurious clothing. Just before the fall of the Roman Empire, Prudentius similarly described women’s rich ornaments:

Not content with naturally implanted beauty,
woman puts on feigned external ornament
and, as if the creating Lord’s hand had imperfectly
made her face, she would finish it either with sapphires
sewn in to embellish a garland circling her brow,
or surround her flawless neck with blazing gems,
or hang from her ears weights of green jewels.
She even fastens white stones from seashells onto
her gleaming hair held with braided threads and golden chains.

In ancient Rome, a much larger share of family income undoubtedly went to wives’ clothes and jewelry than to husbands’ clothes and jewelry. That remains the economic reality of consumer spending right up to our day. Far beyond the feeble regulatory efforts of sumptuary laws, husbands’ subordination to their wives has great economic significance to households and the economy at large.

Husbands’ subordination to their wives can have tragic consequences. Consider Odysseus. He was king of ancient Ithaca and the hero of Homer’s Odyssey. Odysseus’s long struggle eventually resulted in him returning home from the disastrous Trojan War. He then killed all the suitors who were living with his wife and propositioning her. A “traveling man {homo viator},” Odysseus subsequently went to Epirus to consult the Oracle of Zeus at Dodona. There Euippe, daughter of King Tyrimmas of Dodona, entertained Odysseus warmly. Generous to women in providing joy and creating children, Odysseus had sex with Euippe. 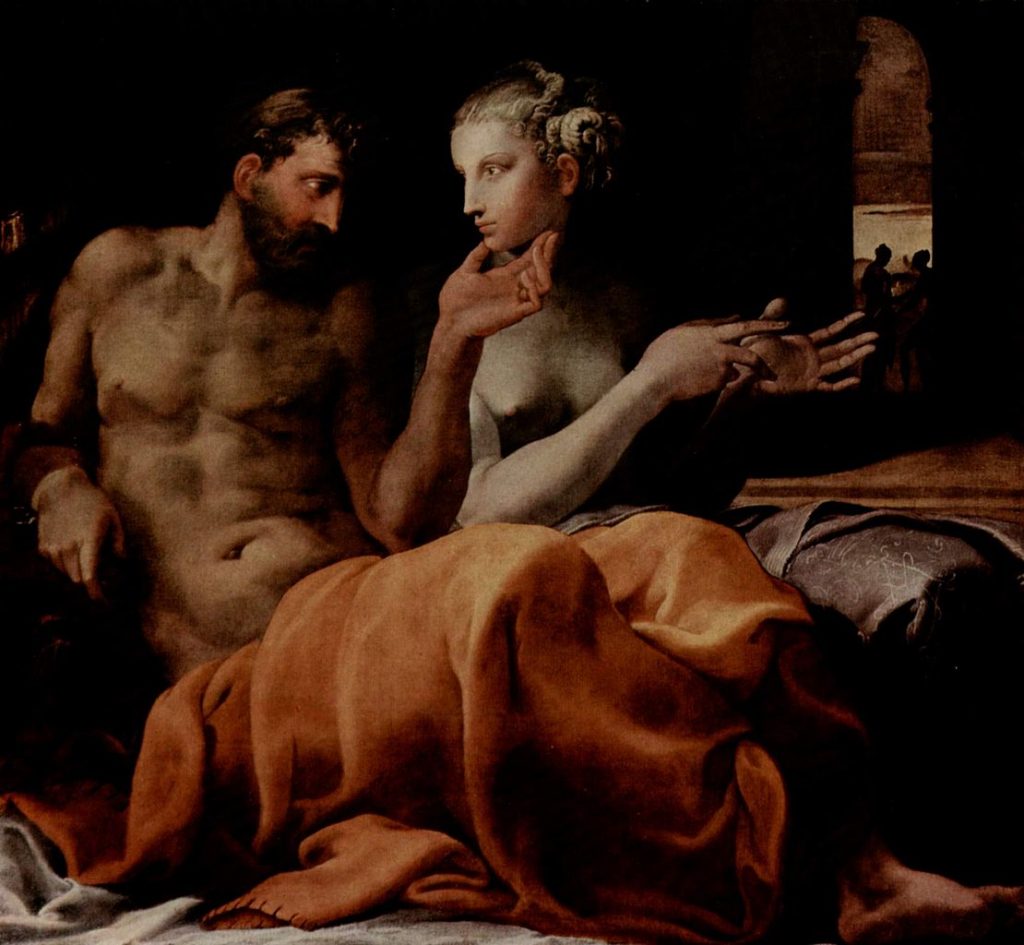 After Odysseus returned home, Euippe give birth to a son named Euryalus. When Euryalus reached manhood, Euippe sent him to Ithaca with tokens indicating that he was Odysseus’s son. At Ithaca, Euryalus become the victim of a terrible crime:

By chance Odysseus wasn’t there at that time. But Penelope had found out what was going on — indeed she had earlier knowledge of Odysseus’s affair with Euippe — and she persuaded Odysseus, on his return, to kill Euryalus as a conspirator before he knew the truth of the matter. And so, through lack of self-control and because in other ways he wasn’t a reasonable man, Odysseus became the murderer of his own son.

Penelope thus incited her husband Odysseus to murder, yet all the culpability is attributed to him. Eventually, the common-law doctrine of coverture formalized a husband’s responsibility for any crimes his wife commits. Men must recognize entrenched, structural anti-men bias in law. This systemic injustice increases the harm that a husband risks in accepting subordination to his wife. Rather than merely listening and believing women, reasonable persons should engage in enlightened questioning. That’s true even for husbands in relation to what their wives tell them to do.

In medieval Europe, Christian church officials taught that marriage should be an equal conjugal partnership. Some medieval poets, in contrast, influentially promoted men-abasing “courtly” love. Many husbands have been and are subordinate to their wives. Injustice anywhere supports injustice everywhere. Our future doesn’t necessary have to be female. Husbands, engage in civil disobedience within gynocentric society: resist and refuse to be subordinate to your wives!

[1] Theodulf of Orléans, “Bishop Theodulf’s Verses against the Judges {Versus Teodulfi Episcopi contra iudices},” incipit “Just magistrates, take the narrow path of judgment {Iudicci callem censores prendite iusti}” vv. 691-6, Latin text from Dümmler (1881) vol. 1, p. 511, my English translation, benefiting from that of Godman (1985) p. 167. The subsequent two quotes above are similarly sourced from Contra iudices vv. 697-700 (If you are secured…) and vv. 701-10 (Soon a boy…).

For a biographic introduction to Theodulf and poetic translation of four short poems, Sypeck (2010). For English translations of Theodulf’s poems, Alexandrenko (1970), Blakeman (1991), and Andersson (2014). For contextualization of Theodulf’s writings, Greeley (2000).

Women’s passivity compels men to act for them. One of the most onerous activities forced upon men is engaging in war. Theodolf described Charlemagne’s sons Charles and Louis:

Youthful and strong, of powerful build,
their hearts are fired with enthusiasm and resolute in their purpose.

This passage reflects “a stock theme from moral diatribes and satire.” Malamud (2011) p. 18, n. 55. It also reflects a significant, enduring economic reality in relationships between women and men.

[3] Parthenius of Nicaea, Sufferings in Love {Ἐρωτικὰ Παθήματα} 3.2-3 (About Euippe {Περὶ Εὐίππης}), ancient Greek text and English translation (modified slightly to be more easily readable) from Lightfoot (2009). Here’s the Greek text of Hercher (1858). The manchette for this story states, “Sophocles tells the story in his Euryalus {Ἱστορεῖ Σοφοκλῆς Εὐρυάλῳ}.” From Lightfoot (2009).

Lightfoot obscures the structural gender bias evident in this story:

The events are equally discreditable to Penelope, perhaps more strikingly, though the author treats them in a matter-of-fact way; her role is presumably influenced by that of Medea. Penelope is no stranger to vice: we are familiar with the innuendo (and worse) about her relationship with the suitors, but here we also see her less familiarly in the guise of the wicked stepmother.

Lightfoot (1999) p. 387 (footnotes omitted). Across all of literary history, Penelope has been overwhelming regarded as a highly praiseworthy woman. Women who commit evil acts are not merely stock characters. They are fully human beings, just as men are.

Alexandrenko, Nikolai A.. 1970. The Poetry of Theodulf of Orleans: a translation and critical study. Ph.D. Thesis. Tulane University.

Greeley, June-Ann. 2000. Social Commentary in the Prose and Poetry of Theodulf of Orleans: a study in Carolingian humanism. Ph.D. Thesis. Fordham University.

Malamud, Martha A. 2011. Prudentius. The Origin of Sin: An English Translation of the Hamartigenia. Cornell Studies in Classical Philology, 61. Cornell University Press.

One thought on “husbands resisting subordination to their wives: an ongoing challenge”