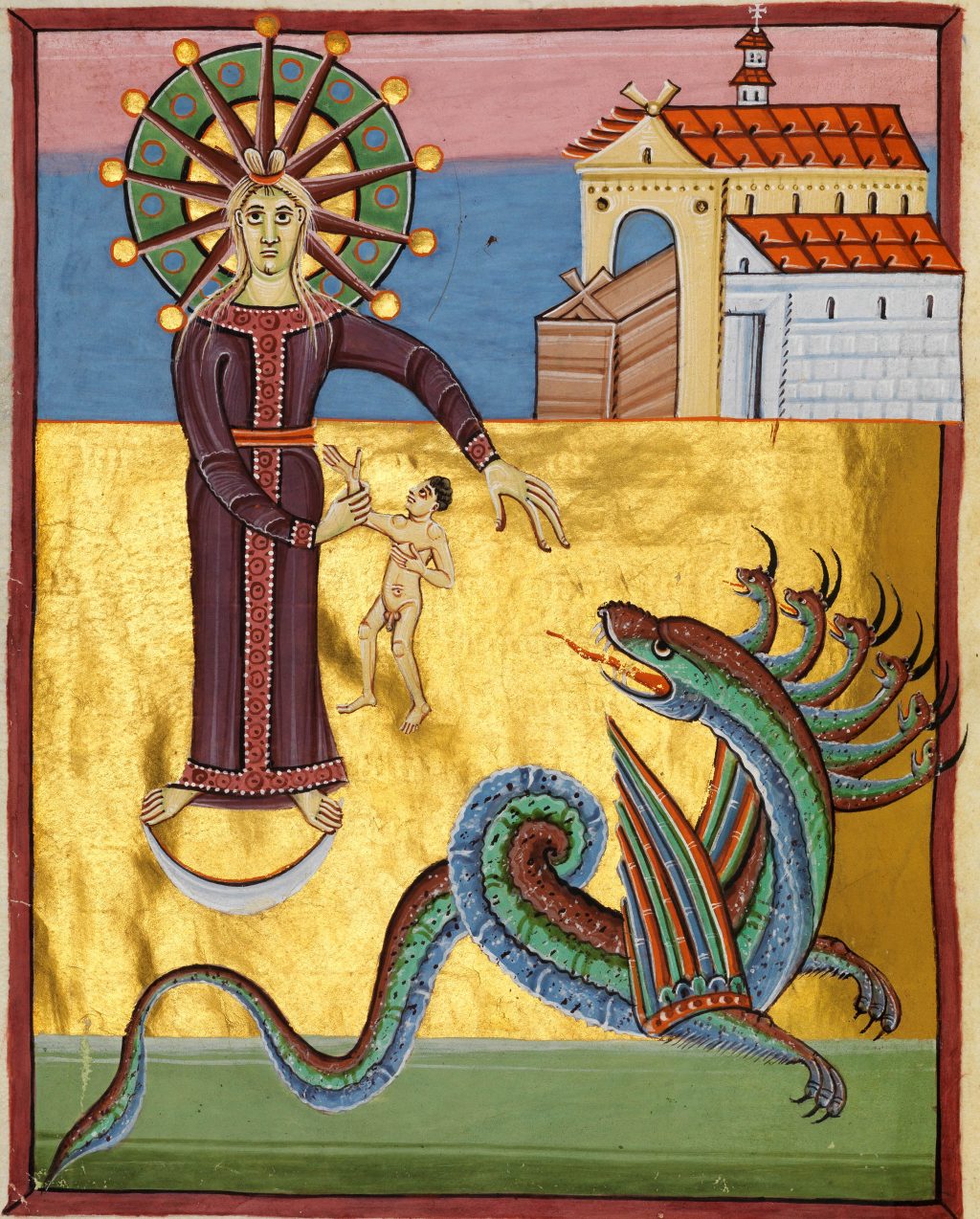 In 203, Saint Perpetua resolutely rejected her father’s abject pleas and triumphantly proceeded to Christian martyrdom. In the sixth-century kontakia of Romanos the Melodist, the blessed Mary overshadows Jesus. Moreover, men’s voices on the way to Jesus’s crucifixion are scarcely heard. Mary the Mother of God and Saint Perpetua aren’t exceptional Christian women in dominating men. Notker of Saint Gall’s ninth-century sequence, “For the festival of holy women,” shows the pattern of Christian gynocentrism. The central position of women in Christianity was ultimately expressed parodically about 1450 in “The Dispute Between God and His Mother.”

Christianity requires its followers to strive for holiness. The seventh-century desert monk John Climacus explored in his Ladder of Divine Ascent the difficulties of obtaining union with the heavenly divine. Notker of Saint Gall’s ninth-century sequence “For the festival of holy women {In natale sanctorum feminarum}” proclaimed that Christ’s love had made heavenly ascent possible for women:

A ladder stretching to heaven,
surrounded by torments —

at its base an attentive dragon
keeps watch, constantly awake,
so that no one even to the first step
can climb unhurt.

Its ascent is barred
by an Ethiop with drawn sword
threatening death.
Its highest step supports
a radiant young man
holding a golden bough.

This is the ladder that Christ’s love
made possible for women to climb.
So trampling down the dragon,
passing by the Ethiop’s sword,
and going through all kinds of torments,
they may reach heaven’s summit,
and from the hand of the consoling
king take the golden laurel.

The ladder surrounded by torments, the dragon at its base, the hostile gladiator, and the magnificent man holding a prize come from visions of Saint Perpetua. Perpetua envisioned herself stepping on the head of the serpent in climbing the ladder to heaven.

Notker generalized the heroic Saint Perpetua to the gynocentric Christian path to holiness. In Christian understanding, Mary, the new Eve, gave birth to Jesus, who stepped on the head of the serpent.[2] Mary thus nullified the serpent’s deception of Eve and gave every woman the capacity to be like Saint Perpetua:

What help was it for you,
unholy serpent,
once to have
deceived one woman,
when the virgin birthed
in the flesh
of God the Father
the one Lord Jesus?

He took spoils from you and
pierced your jaw with a hook
to make a way out for Eve’s offspring,
whom you desire to possess.

Thus you now discern yourself
defeated by virgins, hated one,
and by married women bearing
children who please God,

and by widows now
wholly faithful to their husbands.
They cause you to groan,
you who persuaded a virgin
to be unfaithful
to her Creator.

Women you now see in war
against you becoming leaders,
urging their children
bravely to defeat your torments.

Even vessels of your grace,
prostitutes, are by the Lord cleansed,
and these for himself as a temple
he deems worthy to purify.

Notker insistently privileges women in the Christian way of holiness. The one woman Mary precedes the one Lord Jesus. Mary, made in the flesh according to God the Father, gave birth in the flesh to Jesus. Like a father deprived of custody of his children in gender-biased family courts, Adam is absent; all humans are Eve’s children. The Christian way is that of a blessed woman — from virgin woman, to married woman, to widow (woman outliving her husband). Even women prostitutes are recognized to be, like Mary Magdalene, vessels of the Lord. In Notker’s depiction of the Christian church as the people of God, men exists only at the periphery in their relations to women.[4]

Notker’s closing two stanzas of praise and thanksgiving resonate with the figure of the fallen and redeemed woman. Genesis describes a radical unity of female and male. A central figure of Christianity is conjugal partnership. Yet human societies preferentially provide compassion to women. Notker’s gender-inclusive terms such as “us” are merely surface forms for women’s underlying gender dominance:

For these favors now
let us together,
both the sinners and the righteous,
glorify the Lord,
who strengthens the upright
and to the fallen extends
his right hand, so that at least
after our evil deeds we may rise.

No less human and no less beloved of God, men like women are also fallen and redeemed in Christ. Men, however, tend to be submerged within gender-generic references such as “man.” In the Christian gendering of man’s path to holiness, women are the dominant gender.[6]

About 1450, “The Dispute between God and his Mother {La Desputoison de Dieu et de sa Mère}” comically represented the extreme of Christian gynocentrism. Jesus, living among the poor, brought his rich mother Mary to court with a claim for child support. After describing many lavish cathedrals dedicated to Mary across France, Jesus noted:

In her mansions, enclosed in walls,
with high, crenellated towers,
she keeps relics, chalices, gems,
brocades of fine gold and of silk;
no one could count all the riches
with which her mansions are decked out
…
I dare to say in front of you all
that even the beeswax candles
my mother burns in her houses
cost more than all the goods we have

Mary in response declared that she had earned all her wealth. She disparaged Jesus for his poverty:

I’ve many times caught sight of him
in churches, his arms outstretched,
poor and barefoot and badly dressed.
I well know he will live like this
for as long as this world endures.

The pope, judging the dispute between Jesus and Mary, ruled in favor of Mary. He ordered Jesus to pay all of Mary’s court costs and support all her servants throughout all their lives. Mary was awarded the souls of all who died after having served her well. Gynocentric society privileges women above men, even to the extent of favoring a wealthy Mary over God, her poor son Jesus.

[1] Notker of Saint Gall, also know as Notker the Stammerer {Notcerus Balbulus}, “For the festival of holy women {In natale sanctorum feminarum}” preface to st. 6, Latin text from Godman (1985) pp. 318-21, my English translation, benefiting from those of id., Dronke (1968) pp. 41-2, and A.Z. Foreman. Subsequent quotes from this sequence are similarly sourced.

Notker wrote this sequence about 885 GC. It’s one of the 49 sequences in Notker’s Liber ymnorum {Book of hymns}. Bower (2016), a magnificent edition of that work, is sadly expensive and not readily available.

[3] Notker’s figures associate Perpetua with Christ and universalize her triumph. The ladder parallels Jacob’s ladder to heaven. Genesis 28:10-2. The gladiator (in Perpetua’s account, an Egyptian with whom she fights) is linked to Christian imagery of spiritual struggle. 1 Timothy 1:18, 6:12; 2 Timothy 4:7; 1 Corinthians 9:25-6. The radiant young man holding a golden bough suggests Aeneas visiting the underworld, and the consoling king with the golden laurel, the laurel of Apollo and immortality. Dronke (1968) p. 43. The Christian God, the father and the son Christ in heaven, encompass both. After his defeat of death through his resurrection, Christ harrowed Hell. That’s analogous to Christ overcame God’s impossibility challenge to Job: to snare the face of the behemoth. Job 40.24. For the explication, id. Christ then climbed the ladder to heaven, showing the way for all of “Eve’s children.”

[4] Notker holds a “binary hierarchical version of gender difference.” Cotter-Lynch (2016) p. 101. Notker represents Perpetua in terms of a “strict gender hierarchy.” Gold (2018) p. 160. Neither Cotter-Lynch nor Gold, however, recognizes men’s marginality in Notker’s poem, and neither contextualizes that poem within medieval gynocentrism. The Ruodlieb and Waltharius are much better evidence of medieval gender than are the sermons of Augustine. Women’s Christian gender dominance was obvious in the pilgrimage sites, church dedications, and popular devotion of medieval Europe.

[5] In Latin, the masculine plural substantives peccatores {sinners} and iusti {the righteous} aren’t reserved only for men. Women may be included in those terms. In contrast to Godman (1985), p. 321, but like Dronke (1968), p. 42, I’ve translated those terms gender-inclusively. I have done similarly for filii {children} previously in this sequence.

[6] Men are an addendum in Notker’s poetic scheme:

Notker seems to say, not only the martyr heroines but women in all their womanly capacities can triumph in that encounter and ordeal by which the divine is attained: through the harrowing of hell, in which they were achieved archetypally, they lost their impossible fearfulness. Every woman’s life can become a vindication of Eve, a bruising of the serpent’s head; even the lives of courtesans {meretrices} — for Christ did not reject them.

Godman provides an opposing reading, but similarly backgrounds men as a gender:

Notker’s poem celebrates the very familial virtues which Perpetua repudiated. … His poem is not written in indiscriminate praise of ‘the Perpetuas of this world or Everyman’ {citing Dronke (1968) p. 43}, for the theme of Notker’s sequence is much more daring. Instead of Perpetua he praises Everyman {sic}, and celebrates the extraordinary qualities in the ostensibly commonplace virtues of holy women.

Godman (1985) p. 67. Both Dronke’s and Godman’s interpretations agree that women are the dominant gender in Notker’s poetic representation of the ladder to heaven. So too are women in Christian literary history generally.

All the while she withholds my share from me,
and I’m certainly no bastard!

And it seems to me he is right
to claim his father’s legacy,
if you were indeed his mother!

Vv. 100-3. Paternity laws today use biological paternity to assign sex-payment (“child support”) obligations when no other man is assigned them.