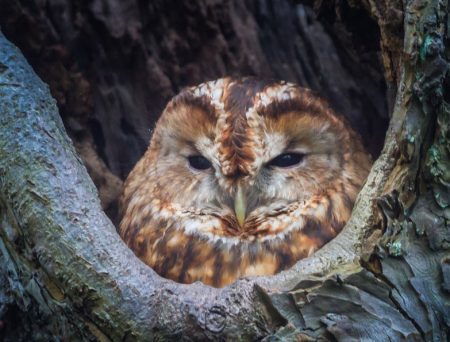 The Owl and the Nightingale, a Middle English poem dating probably to about 1200, provides under-appreciated insight into the social positions of women and men. An owl and a nightingale throughout the poem debate widely their relative merits as birds. Both birds are “unanimous in their sympathy for women both inside and outside of marriage.” The birds are “extravagantly partisan” in support of women; they engage in “patent partisanship for women.”[1] Modern scholars of medieval literature have been united in praise for the The Owl and the Nightingale. But lacking the deep literary self-consciousness of medieval poets, modern scholars haven’t understood what they are praising.

The Owl and the Nightingale mocks shallow and pretentious scholarly thought about why men commit adultery. Regarding husbands’ sexual fidelity to their wives, the nightingale declared:

It seems to me quite stark and shocking
how any man, for any cause of behaving,
could turn his heart to the life
of doing it with another man’s wife.
For it’s either one of two things —
a claim for a third no man can bring.
Either her lord is very worthy,
or he’s feeble, and of all good empty.

That’s formally pretentious, yet utterly ridiculous reasoning. All men are fully human beings. All men potentially are very good men. In reality, not all men are either very good or very bad. Most men are somewhere in between. Most benefit from sympathetic support in their struggles to realize their inner goodness. Polarizing men’s persons demeans men’s potential.

Strong incentives for men to commit adultery can easily be recognized, yet are scarcely discussed. Some husbands have emotionally and physically abusive wives. Some husbands suffer within a sexless marriage. Moreover, sexless marriage is more prevalent in modern marriages in which wives feel no obligation to have sex with their husbands. In addition, long-standing, unjust, and absurd paternity and “child support” laws create huge financial incentives for men to have sex with married women who aren’t their own wives. Under the “four seas” common-law doctrine of legally imposed cuckolding, a woman’s husband, not her lover, is required to support financially any children that she produces through adultery. Reproductive choice is today a holy and sacrosanct principle, but only for women, to their own harm. Thus men seeking to avoid state-imposed, forced financial fatherhood have a strong incentive to commit adultery with married women. The nightingale, with her relatively intelligent bird brain, probably knew that.

No man with wisdom will seek to plan,
if the husband’s an honorable and worthy man,
in any way for his wife to do him shame.
For he himself should fear harm and blame,
and fear losing that which hangs below —
no longer able to join where his desires go.

According to the nightingale, an “honorable and worthy” husband would castrate an adulterer. That’s vicious sexual violence against a man. It’s also historically plausible. In contrast to dominant myths, punishment for adultery throughout history has been biased against men and harshly administered to men. Regardless of their personal circumstances, men not afraid of being castrated aren’t supported with excuses for committing adultery:

And though he not have such fear,
it is iniquity and folly dear,
to wrong a good man in his bed
and seduce the wife to whom he’s wed.

Seduction is socially constructed as a crime that men commit against women. The woman is innocent of having agency, and sex is the man’s fault.

If her lord is physically unable,
with little to offer in bed and at table,
how might there be any love
when such a churl’s body has laid on hers from above?
How would any love there be nigh
when such a man is groping her thigh?
…
And if the lord is a wretch,
what pleasure from her could you fetch?
If you think about with whom she lies,
you might with disgust your pleasure buy.
I don’t know how any man of standing then
Could seek to visit her again.
If he thinks about in whose place he lay,
then all his love would go away.

Few men other than those with a cuckolding fetish enjoy imagining another man groping their beloved’s thigh and having sex with her. Men typically address this problem by disengaging their minds when seeking sex. Thus many structurally oppressed men throughout history have possessed the capability of resorting to female prostitutes. While, if feasible, most men would prefer to marry a debt-free virgin without tattoos, men personally are able to adjust to the reality of the women available to them.

Socially constructed sexual disgust controls men through status attacks on men. Men, for good evolutionary reasons, care about their social status relative to other men. The nightingale implicitly asserted that a man’s status depends on the status of all men who had sex with a woman with whom he’s having sex. That’s not necessarily so. The sexual status-shaming of men depends upon social acceptance of the status claims intended for that work. Under gynocentrism, society accepts those status claims and relatively strictly controls men’s sexuality.

A young girl knows not what such is,
her young blood leads her amiss;
and some foolish man entices her to it
by all the means that he might intuit.
He comes and goes, demanding and begging,
and stands next to her, then by her sitting,
yearning for her often and for long.
What can the child do other than go wrong?
She didn’t understand what it was
and therefore thought to try what a woman does,
and to know indeed what be the game
that makes such a wild creature tame.

In gynocentric literature, men have been figured sexually as dogs, pigs, hawks, and wolves, among other wild creatures. Men’s very genitals are commonly likened to lethal weapons.[3] Women, in contrast, are imagined to tame, civilize, and ennoble men. Women at the same time are absolved of sexual responsibility as if they were children.

The “patent partisanship for women” in The Owl and the Nightingale provides a comic burlesque of gynocentric society. Modern scholars deeply invested in gynocentrism have failed to understand it. One concluded:

the poet makes us highly aware, not only of the importance of the marital system for women, but also of its inadequacies — and in particular, of the potential dire consequences for women whom marriage did not protect. [4]

Did marriage protect men? What explains the reality of family law today? Even now with gender equality being professed as having utmost importance, almost no one cares about men. About the year 1200, The Owl and the Nightingale laughed poetically at that fundamental injustice.

The Owl and the Nightingale has survived in two manuscripts: London, British Library, MS Cotton Caligula A.ix (C), ff. 233ra-246ra, and Oxford, Jesus College MS 29 (J), ff. 156ra-168vb. Both of these manuscripts apparently date to the second half of the thirteenth century. The Owl and the Nightingale is “one of the earliest substantial texts to be written in Middle English.”

[3] In The Owl and the Nightingale, the owl describes men’s sexual passion using the beastly figure of stinging. Yet her description shows some sympathy for the sexual madness that men suffer:

In summer peasant men go mad
cramping and contorting themselves more than a tad,
yet to love this is not due,
but to the mad rush that runs him through.
For when his deed he has done,
all his boldness is lost and gone.
Once he has stung under her gown,
his love lasts no longer and goes down.

ll. 509-16. Cartlidge commented, “The Owl’s perspective is implicitly gendered — it is male sexuality which she finds so offensive.” Cartlidge (2001) p. 60, explanatory notes to 509-16. That comment seems to me to miss the poem’s critical perspective on demonizing men for their sexuality.

[4] Cartlidge (1997) p. 199. Cartlidge also invokes the antimeninist cliché of the “silence of women.” Id. p. 198. Even medieval peasants would have guffawed in contempt for modern scholarly claims about the silence of women. Gardner at least recognized generally that The Owl and the Nightingale is a “comic burlesque.” Gardner (1971) p. 267.

[image] Owl withdrawn into tree. Excerpt from an image provided under a CCO Public Domain license by Max Pixel.

Cartlidge, Neil, ed. and trans. 2001. The owl and the nightingale: text and translation. Exeter: University of Exeter Press.

2 thoughts on “bird-brains engage in scholarly debate: The Owl and the Nightingale”